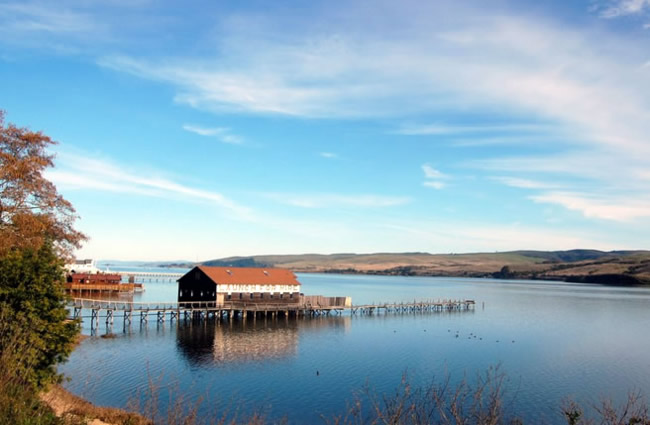 In Marin County, only 40 miles north of San Francisco, visiting the Tomales Bay Region is like visiting another world. Tomales Bay is a long, narrow strip of water that opens off of Bodega Bay. Because it is an outcropping from another bay, the water in Tomales Bay is protected from the strong Pacific currents.

The Bay lies along a submerged portion of the San Andreas Fault, which probably explains why it’s so narrow – at some point, a quake must have opened up the tiny entry to Tomales Bay, submerging lower areas surrounding the fault. 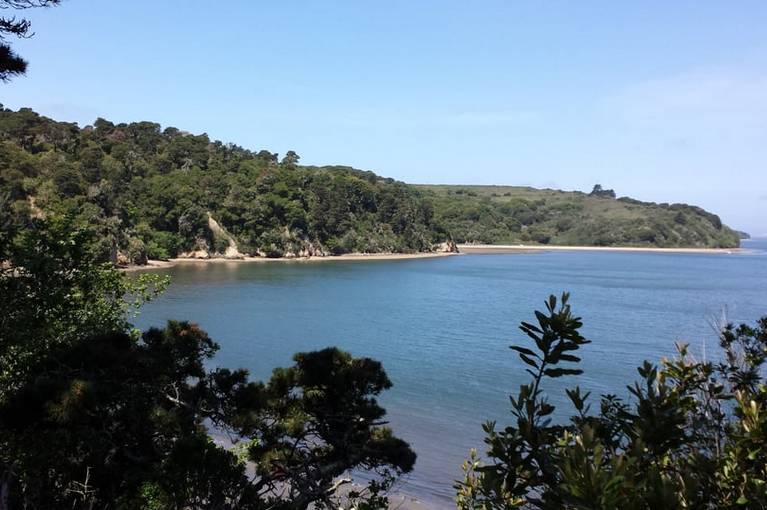 While there has been little development on the east side of the park beyond a picnic area and restrooms on Millerton Point, the west side of the park is home to four beaches, hiking trails, and an interpretative center demonstrating the way of life for the Coast Miwok Indians who first lived on the bay, including two replica Miwok houses. 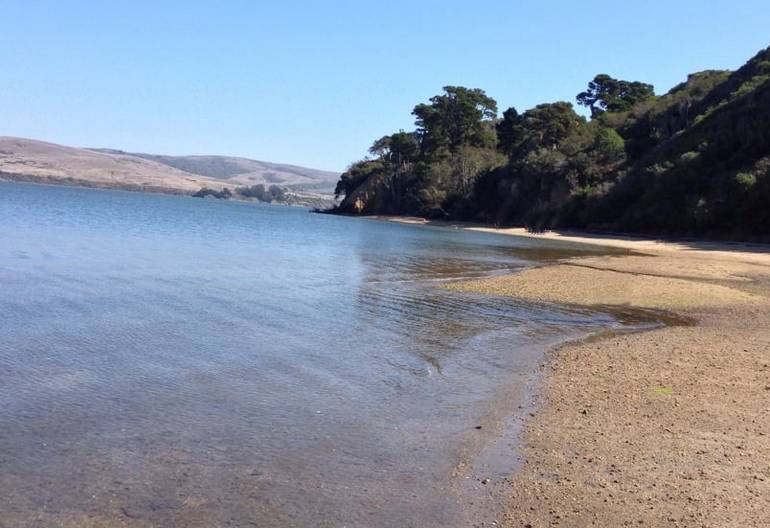 Of the four beaches, only Heart’s Desire Beach has a parking lot. The other three beaches, Indian Beach, Pebble Beach, and Shell Beach, are only accessible by foot or boat. At Heart’s Desire Beach, you will find an area where you can launch hand-carried boats, a picnic area with barbecues, restrooms, and swimming.

However, once the parking lot is full, no other cars are allowed into the park, not even to drop off passengers or gear. Because this state park is popular, the parking can be full by 11 a.m. 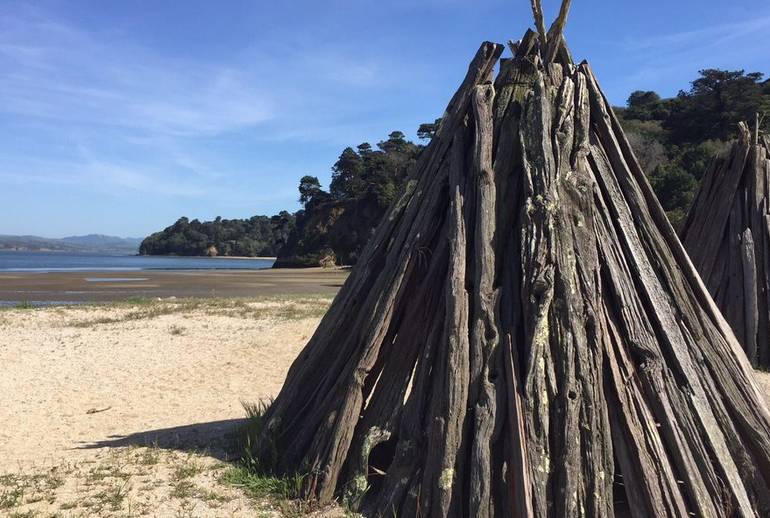 Indian Beach is home to the interpretative program for the Miwok Indians and is dominated by the two tall, conical reproductions of Miwok houses.
The Indian Beach Nature Trail leads directly to Heart’s Desire Beach.

Pebble Beach and Shell Beach can be reached by traveling along the Johnstone trail, named after two of the conservationists who worked so hard to preserve an area of Tomales Bay as a state park. The Johnstone trail is not the only hiking trail in the park; the Jepson trail travels from the main gate to Heart’s Desire Beach. 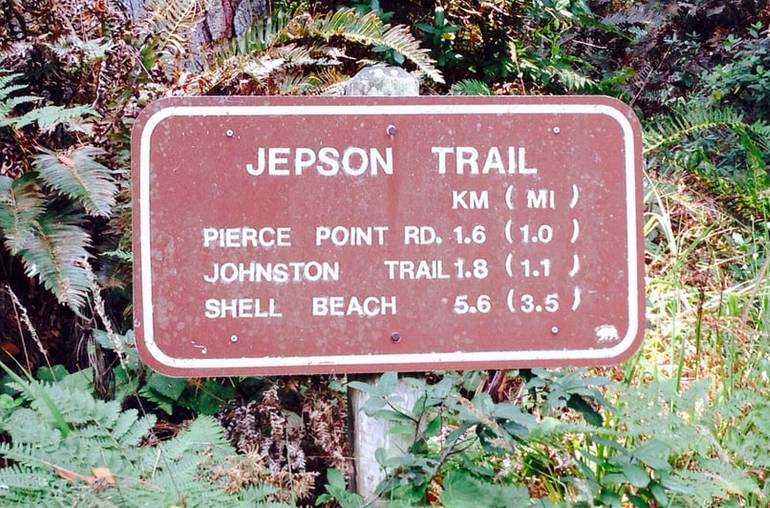 Named after the botanist who established the School of Forestry at UC-Berkeley and who wrote an authoritative guide to the plants of California, the Jepson trail passes through some of the rare virgin Bishop Pine stands of trees left in California. 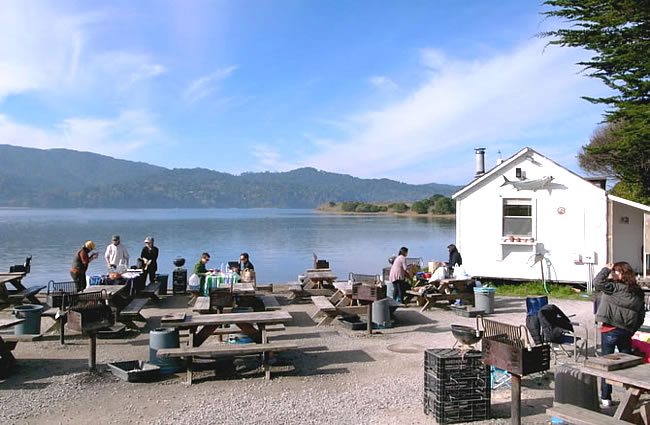 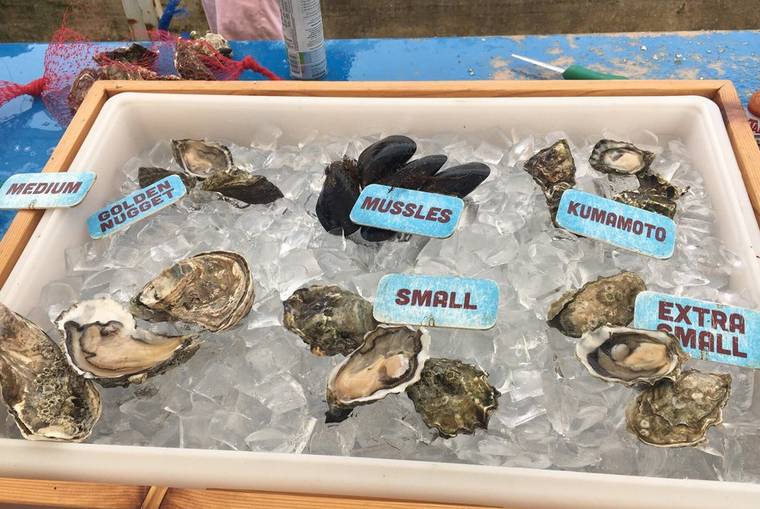 In addition to the picnic area, there is a shallow beach area at the Tomales Bay Oyster Company that visitors can walk along. Swimming is not permitted due to the oyster beds in the area, but splashing in the shallow water is. Even if you don’t want to picnic, you can still go to the TBOC to purchase fresh oysters, clams, and sometimes mussels. TBOC is located at 15479 CA-1, Marshall, California. Website.

If you prefer a seascape that is even wilder than the beaches at Tomales Bay State Park, you should consider a visit to the Point Reyes National Seashore, immediately north of the west part of the State Park. The seashore provides visitors with over 80 miles of unspoiled beaches, and the park protects over 71,000 acres. 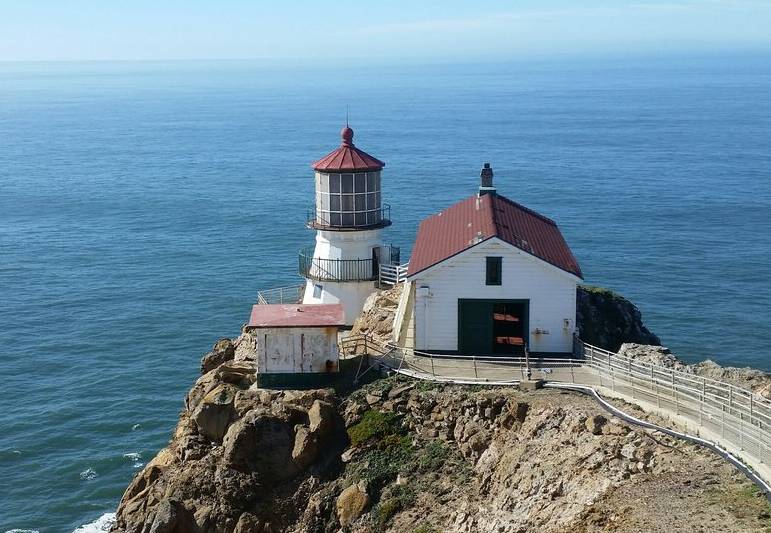 As fascinating as these three attractions are, they are only a portion of the activities available in the Tomales Bay area. Be sure to take a day out of your schedule to come to Tomales Bay and see what it’s about for yourself.